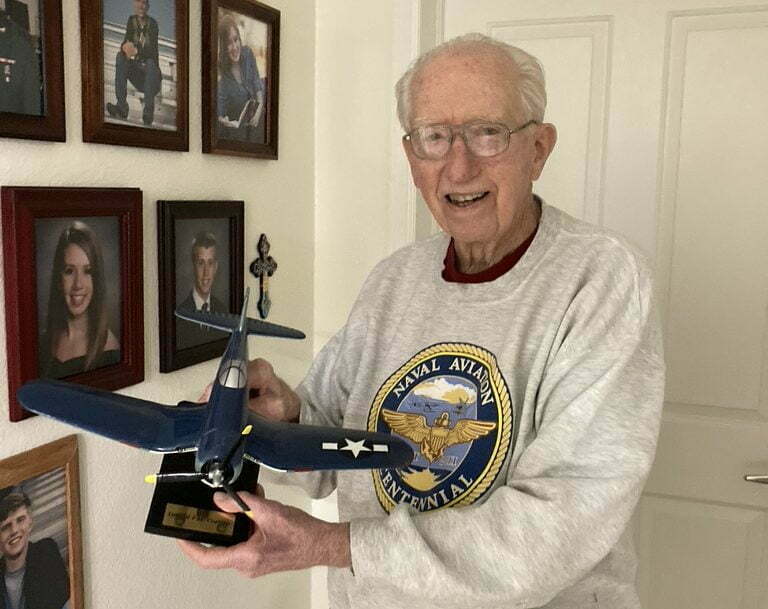 “Our mission was hunting submarines,” shared Jerry Detwiler, holding up a model of a patrol bomber sea plane at his home in Holly Creek Life Plan Community. “We had magnetic subsurface detection gear to track them under the water.” 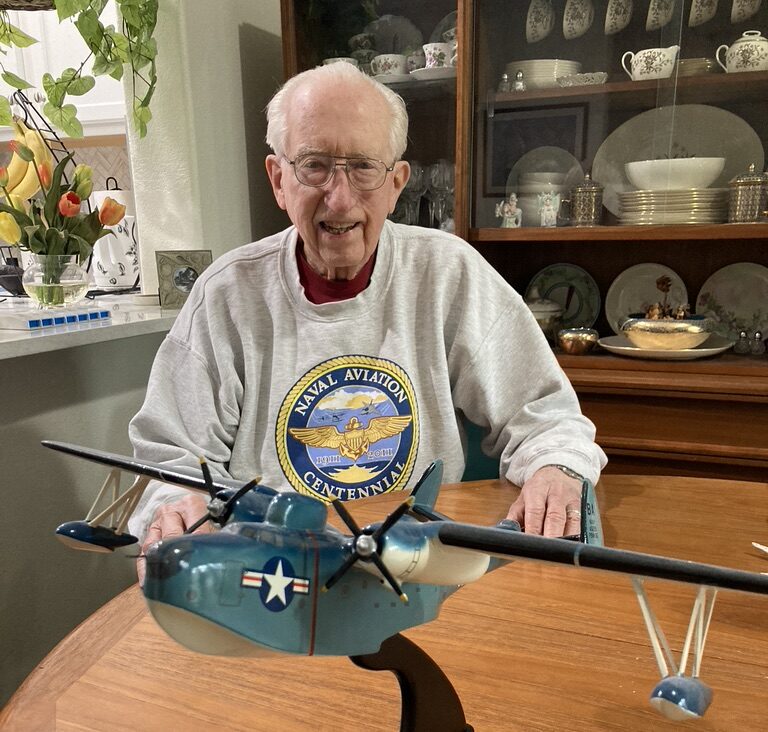 Detwiler with the first naval plane he served aboard – a PBM Mariner.

June 25th marked the 71st anniversary of the Korean War, which began in 1950. For most, the war is but a faint memory or a couple words in a history book. But seven decades later, it still stands clearly in the mind of Jerry Detwiler—the “Forgotten War” set the course for his entire career.

Detwiler was selected for the naval aviation program when he was just a senior in high school. Military service was nothing new to the Detwiler family — Jerry’s father fought in WWI, his two older brothers served in WWII and Jerry’s younger brother joined him in the Korean War.

Jerry received two years of college and then, “in February 1949 I had orders to Pensacola for aviation flight,” Detwiler explained. “My first deployment was to Tawakoni Japan, and I stayed there on active duty until the middle of 1953.”

Jerry began as midshipman and rose to the rank of ensign serving as a second pilot navigator—a copilot role. He flew with fourteen other crewmen in a PBM Mariner, a long-range patrol bomber sea plane on missions that lasted 13-15 hours at a time. In addition to searching for submarines, his crew also helped the Navy track all shipping in the area. And when they docked for repairs, he read and fished from the plane.

After twenty missions, each naval airman was awarded an air medal. Detwiler has not one but two. He stayed in the Navy for a second deployment to the Philippines and retired from active duty as a plane commander at age 23.

After the war was over, Detwiler moved his love for flight from serving his country to serving the next generation of pilots. He finished his degree and moved into teaching the Flying Safety Officer Program for the University of Southern California, first in CA and then to students all over the world. Accident safety remains an issue near and dear to his heart since his brother was lost to an airplane accident over the Santa Barbara Channel.

All the while, he continued to fly — serving in the Navy Reserves for another two decades. From additional anti-submarine to transport planes there are few Navy aircraft that Detwiler hasn’t flown. In fact, he turned down being promoted to captain because it would have disqualified him as a pilot.

“Eventually he got to fly the plane he’d always wanted,” his wife Rosie shared. “The Vought F4U Corsair,” which has 2,000 horsepower and can cruise at faster than 435 miles per hour (model pictured in the header image).

He did eventually retire as Navy captain and moved with his wife to Holly Creek Life Plan Community in Centennial to join a number of their friends. At their new Holly Creek home, the Detwilers have displayed an array of medals, countless plane models and beautiful navy photographs as a reminder of his many memories from the “Forgotten War,” and the issues that — though perhaps forgotten — are still very real.

“They may have signed an armistice, but the issues between North and South Korea are still far from resolved,” Jerry shared. “Nobody has been able to reach a compromise, and it’s always put on the back burner. As a result, it doesn’t get much play in the public eye.”

Jerry shares about the war and the importance of those who served in his own way — by offering his story and displaying a flag on his Holly Creek balcony that was flown over Pearl Harbor at the USS Arizona Memorial. And he also keeps and will one day fly a flag from his grandson, who brought it home from his own service in Afghanistan.

Located in at 5500 E. Peakview Avenue in Centennial, Colorado, Holly Creek is owned and operated by Denver-based not-for-profit Christian Living Communities. CLC has been providing quality senior care in the south Denver metropolitan area since 1972. More info at https://www.hollycreekcommunity.com/. 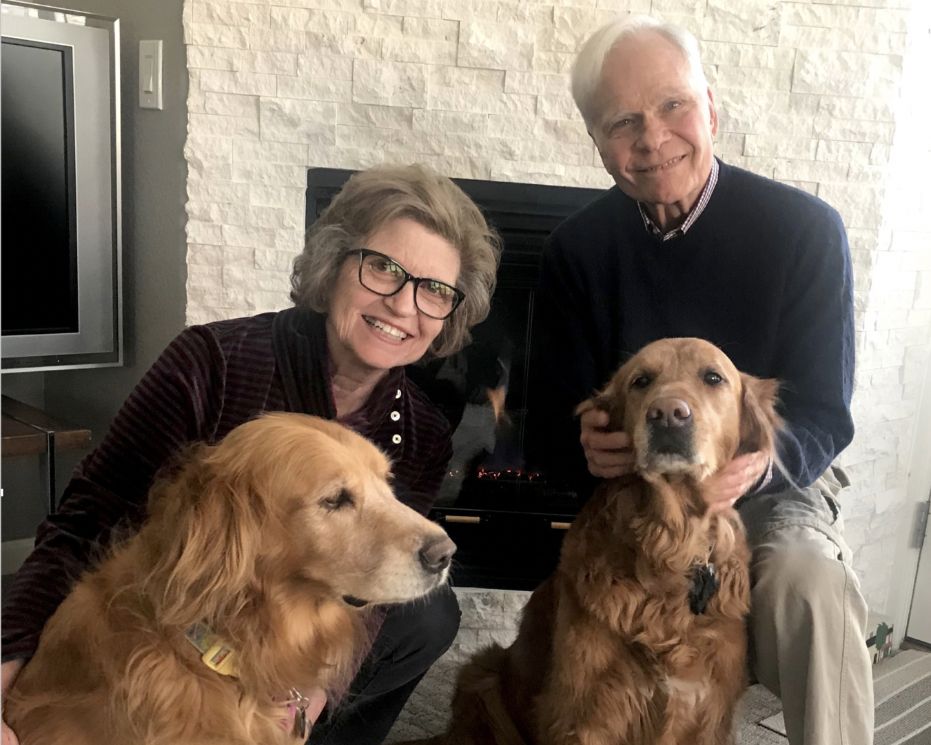 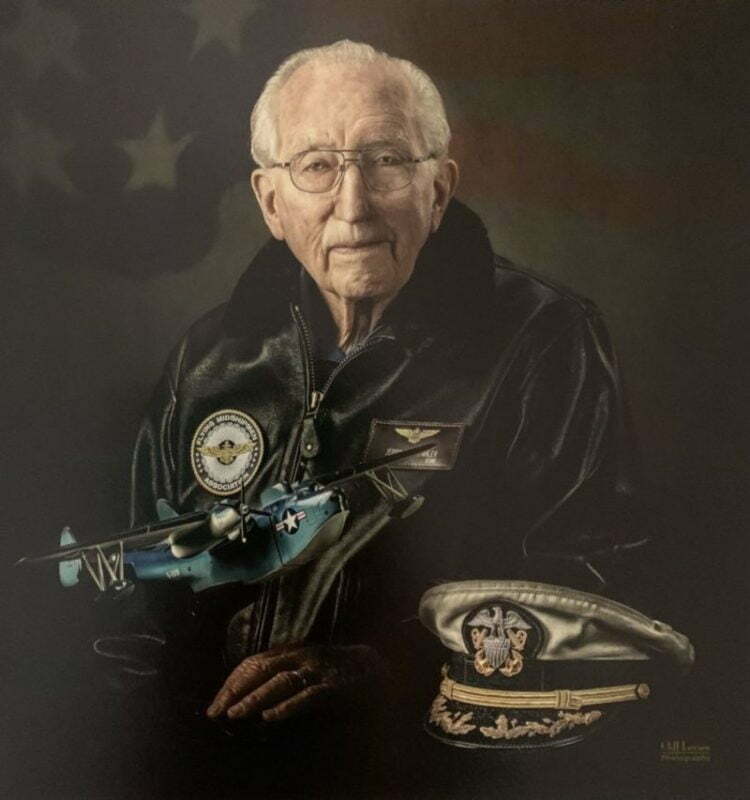