Madge Morgan lists “living at Holly Creek” as one of the pros of retired life. For one thing, it allows her to continue her weekly grocery trips since she recently made the choice to give up driving for her birthday.

“The driving options are great. They are very well organized and take you right to the door of the place you’re going. I do miss my independence, but I can’t imagine causing an accident. How could I ever get over it? And I can’t tell you how pleased and grateful my kids are that I quit voluntarily.”

Madge grew up in a suburb of St. Louis and learned the basics of driving from her mother during WWII. Gas rationing meant, however, that she never actually sat in the driver’s seat until she had to drive her husband home following an accident he had at work — an experience she will never forget.

“I was terrified,” she recalls. “I just wasn’t used to it. I walked everywhere. We were married three years before Joe finished school and we got a car.”

The old Chevrolet they finally did purchase — lovingly nicknamed “the limousine” — eventually became Madge’s main mode of transportation around town. When she moved with her husband to Holly Creek Retirement Community, Madge continued to take the AARP Safe Driving course and regularly drove several times per week. But she began to notice that she had limited visibility over the hood of her Acura.

“I used two fat cushions and still couldn’t see as well as I should,” she recalls. One instance, in particular, stand out in her mind. “I was driving with my son on a pretty major street that had been repainted, and I was almost over the lane marker but had no idea. That’s what really got me thinking. Of course, nobody wants to give up driving, but I promised myself that I would stop.”

True to her promise, Madge did just that.

“I still miss not having my car,” she admitted, “but I’m glad I made that commitment. I know it was the right thing to do.”

Madge isn’t the only resident at Holly Creek who regularly gets out two to three times a week without personally driving. Ben Casillas has a similar story.

“I have developed some balance difficulties where I can stumble. I don’t want to fall or damaging anything, so I chose to give up driving my car,” he shared. “Honestly, I don’t regret quitting. Some folks feel like they’re giving up their independence. I didn’t feel that way. Since I live at Holly Creek, I have great transportation options. I’ve also been using Lyft and Uber.”

Ben goes to the grocery store every other Wednesday and gets out and about multiple times every week.

“The group transportation is mostly free, and they offer multiple options of times to come back. They also have designated drivers you can hire.”

Far from feeling a loss of independence, Ben has found that it has offered him an opportunity to further develop relationships with the neighbors in his community.

“Sure, giving up your driving takes some aspects of life away, but your life is still going to be full. Holly Creek is a community itself and has really helped me meet new people.”

He continues to be very involved in various of Holly Creek’s on-site programs and has regular morning coffee with four of his community friends.

Madge agrees. She is especially appreciative of special transportation and opportunities that the community helps arrange.

“I particularly love our outings to the University of Denver music performances,” she explained. “I’m grateful every day that I am here.”

This story originally appeared in Denver Post’s YourHub and is used by permission. 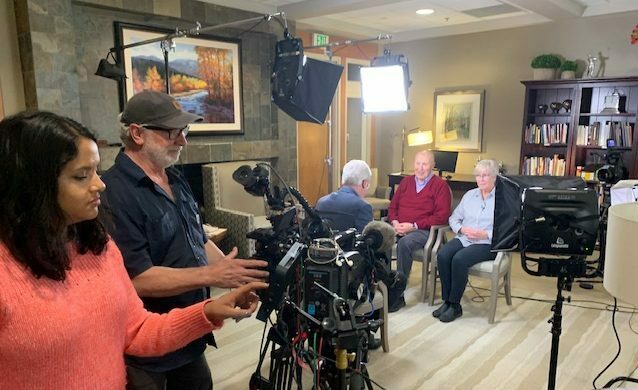 Holly Creek in the News – the Year in Review